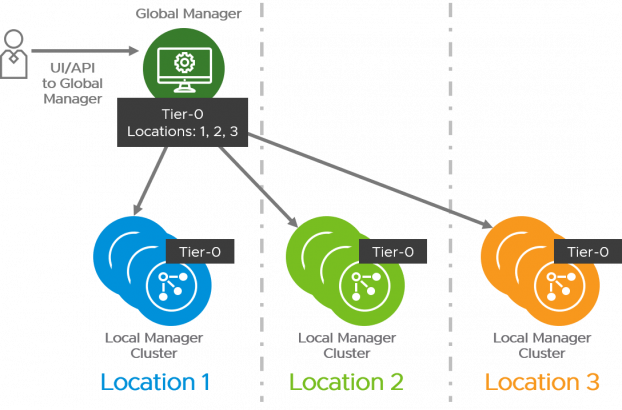 One of the most deployed features in my experience with NSX-V was Cross vCenter NSX, which allows a multisite deployment.
To reduce the cost of licensing and for automated failover you can instead deploy a stretched cluster thus only requiring a single vCenter and NSX license but with the added cost of a stretched network and potentially stretched storage unless of course you use a DR recovery solution such as SRM to failover your vCenter and NSX Manager.

What prevented a lot of customers from deploying NSX-T until now was the lack of a fully functioning Cross site deployment.
NSX-T Multisite has been around for a while and was adopted by some however it follows either the stretched cluster model or requires a manual backup restore of the NSX Manager on the DC 2 site and so this has some limitations, that is until NSX-T 3.0 where we now have NSX-T Federation, this is a game changer and so there is nothing stopping customers from moving to NSX-T.

NSX-T Multisite is still a valid deployment option for NSX-T 3.0 and as I understand it only requires an Advanced license so it’s cheaper than going for a Federation build however that does have it’s limitations due to how multisite functions.

The diagram below shows an active-active deployment.

In both instances the system can be configured in two different ways one allows an automated failover of the management and data plane the other requires a manual/scripted failover.

To allow an automated failover of the Management plane the system must be configured as follows
Requirements:

The diagram below shows an automatic recovery of the management plane.

To allow an automated failover of the Data plane the system must be configured as follows
Requirements:

Note: The failover mode of the tier-1 gateway can be preemptive or non-preemptive.

The diagram below shows the automatic recovery of the data plane.

Since the T0 and T1 gateways are configured in Active/Standby mode they failover automatically during the Primary site failure.

To allow a manual/scripted failover of the Management plane the system must be configured as follows
Requirements:

vSphere HA, or a stretched management VLAN, is NOT required.
Each site has its own Management vCenter servers which stay in the same site these vCenters are added as compute managers to NSX-T
NSX-T Managers must be associated with a DNS name with a short TTL.
All transport nodes (Edge nodes and hypervisors) must connect to the NSX Manager using their DNS name. To save time, you can optionally pre-install an NSX Manager cluster in the secondary site.
The recovery steps are:

The diagram below shows manual/scripted recovery of the management plane.

To allow an manual/scripted failover of the Data plane the system must be configured as follows
Requirements:

The Edge nodes can be VMs or bare metal.
The tier-0 gateway can be active-standby or active-active.
Edge node VMs can be installed in different vCenter Servers. No vSphere HA is required.
The recovery steps are:

The diagram below shows the manual/scripted recovery of the data plane.

NSX-T Federation allows you to manage multiple NSX-T Data Center environments with a single pane of glass view.
You can create gateways and segments that span one or more locations, and configure and enforce firewall rules consistently across locations.
This is basically what we have in NSX-V cross vCenter NSX.
One of the major differences is with how distributed firewall works. with NSX-V we had the concept of Universal objects and rule whereby the object or rule was created and managed only from the primary site and was replicated to all secondary sites. The main use for this was using Universal Security Tags for DR failover. There were other use cases but the security group could only really use the VM Name as a reference and as VM names can be changed by any vCenter admin this can lead to the firewall not functioning as desired.

With NSX-T federation we no longer have or need Universal objects as the Global Manager is connected to all Local managers and has visibility of all VM’s across the sites, as such Distributed firewall rules and objects can be referenced from anywhere and rules are maintained when VM’s migrate.

Once you have installed the Global Manager and have added locations, you can configure networking and security from Global Manager.

There are two types of NSX Managers in a federation deployment, both are deployed from the same OVA file.

You do not directly configure the span of a segment. A segment has the same span as the gateway it is attached to.

Security objects have a region. The region can be one of the following:

In a Federation environment, there are two types of tunnel endpoints.

Security groups can contain VM’s that span more than one location and can included dynamic membership, for this we need to synch information from each location to list the group membership.
For example, Group1 has the following members:

Tier-0 gateways, Tier-1 gateways, and segments can also span one or more locations in the Federation environment.

You can configure Tier-0 gateways that exist in only a single location this is the same as configuring them locally on the Local manager but deployed via the Global manager they can only be managed from there.

Tier-0 Gateways can be configured as Active/Active in a primary and secondary location this is similar to Active/Active NON local Egress deployment in NSX-V whereby all traffic egresses via a single site.

Or they can be configured in an Active/Active in all locations configuration think Local Egress in NSX-V where traffic will leave via the local site. Care must be taken to ensure that traffic returns to the correct site as this is asymmetric routing and firewalls may drop the traffic if it enters back via a different site.

You can deploy a Tier-1 gateway to provide distributed routing only, or you can configure services on it.

You can create a Tier-1 gateway in Federation for distributed routing only. This gateway has the same span as the Tier-0 gateway it is linked to.
The Tier-1 does not use Edge nodes for routing. All traffic is routed from host transport nodes to the Tier-0 gateway. However, to enable cross-location forwarding, the Tier-1 allocates two Edge nodes from the Edge cluster configured on the linked Tier-0 to use for that traffic.

If you need one of the following configurations you will need to configure the Tier-1 gateway with Edge clusters:

If both the Tier-1 gateway and the linked Tier-0 gateway have primary and secondary locations, configure the same location to be primary for both gateways to reduce cross-location traffic.