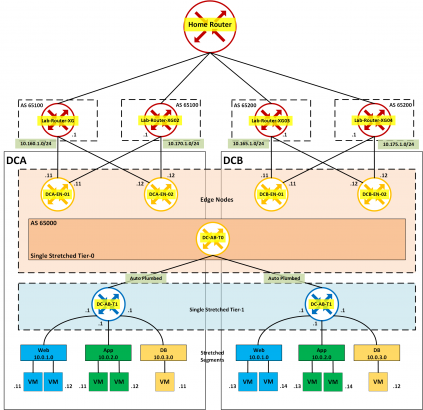 I have three physical hosts, these are Dell Poweredge T20 Servers they are about 3 years old and each has a single four core Intel(R) Xeon(R) CPU E3-1225 v3 @ 3.20GHz . Each host has 32 GB of RAM and a single onboard 1GB NIC, additionally each host also has a 4 port 1GB NIC card.
So the hosts are not particularly new and not particularly beefy and as a result they are really struggling with this Federation build which is why I have a new server going into the cluster which has the same resources as four of my current three hosts!
The physical adapters on the hosts are configured as per the below screenshot.
I’ve kept the management and storage on local vSwitches for simplicity, Management on vSwitch0 and Storage on vSwitch 1.
While VMNIC’s 2 and 3 are connected to the Lab-VDS

Each host port is trunked with the following configuration.

For storage I’m using a Synology NAS with spinning disks over the 1GB network with two datastores configured for the lab, again it’s not the fastest in the world but since I don’t really run many client VM’s and I have no intention of running Horizon it does the job OK.

I also have a VDS configured on the Edge cluster.
The two nested Edge hosts are added to this VDS which runs the port groups Edge-Mgmt VLAN 10 and DCA/B-Trunk-A and B which trunk all VLANs

The intention of this series is to detail the configuration of NSX Federation as such I won’t be showing the full NSX deployment thats already been covered on my blog. So here is a brief summary of the starting state before the Federation build.

In my original lab setup blog I created two new Transport Zones.
When building Gateways and Segments in Federation the system will use which ever Overlay Transport zone is set as the default and by default that is the system created nsx-overlay-transportzone.
In order for me to use my own one I need to change the default to my TZ-Overlay I’ll cover that in the blog when I get to deploying the Federation components

In DCA there are two transport zones

In DCB there are two transport zones

DCA-TZ-VLAN has two Uplink Teaming Policies configured, these are used on Tier-0 Segments see NSX-T 3.0 Lab Single N-VDS Edge Nodes for how these are used.

DCB has the same setup with DCB-Uplink1 and 2.

There are two uplink profiles per site.
The ESXi Host profiles contain the respective Overlay VLAN 150 for DCA hosts and 155 for DCB, it is configured with a Load Balance Source ID teaming with Uplink-1 and Uplink-2 set to Active.

There is a Transport Node Profile on each site set to use VDS with the TZ-Overlay Transport Zone and the ESXi uplink profile.

There is a TEP Pool configured for each site used by the Compute hosts and the Edge Nodes.

I’ve deployed two Edge nodes on each site and added them to an Edge cluster.
Each node is configured as part of the TZ-Overlay and DCA/B-TZ-VLAN Transport Zones and uses the Edge Uplink Profile and the TEP pool.
The Edge interfaces are mapped to the DC Trunk port groups on the Edge VDS.

The diagram below shows an illustration of what we will be setting up during the lab series from a networking perspective.

If I break it down further you can see how that maps to the Edge nodes.
The stretched T0 runs as active/active on the Edge Nodes these in turn connect via two uplinks to the Lab routers for ECMP.

I’m not showing how the Edge nodes map to the VDS and those uplinks as this is just an overall routing diagram.